The Texas School Safety Center is continuously engaged in scholarly research focused on a variety of topics related to school safety, security, and health. To disseminate the findings of these research projects, the center is committed to publishing practitioner technical reports with a focus on tangible real-world recommendations to address areas related to safety, security, and health in schools. In addition to publishing these practitioner reports, the center is also dedicated to contributing to the scholarly discussion of these topics by publishing its work in various journals. By publishing its research in these different formats, the center aims to connect rigorous scholarly research with real world practical solutions that stakeholders can use to continuously improve safety and security in their schools.

The TxSSC Research Team, with partners from the Texas State University Department of Curriculum and Instruction and WestEd, tested the school-based law enforcement (SBLE) framework with respect to how the framework could contribute to variable outcomes. The published report includes recommended practices for integrating school-based law enforcement into the educational environment and can be read on the National Institute of Justice website. 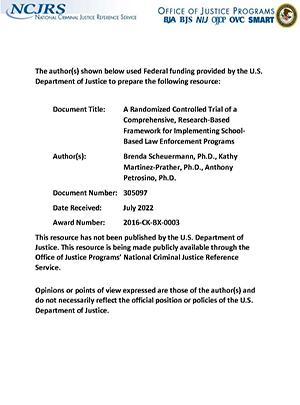 School-based policing, one of the fastest-growing areas of law enforcement, requires unique skills and presents unique challenges. Specialized training for school resource officers (SROs) is encouraged by the US Departments of Education and Justice (2016) and states are increasingly making available or requiring SROs to complete training designed to better prepare them for school settings. In 2016, Texas mandated a comprehensive, 16-h training programme for SROs from moderate and large school districts. In this paper, we describe a survey conducted to assess perceptions of the first class of SROs to complete that training. We describe SROs’ perceptions of the quality and content of the training, need for the training, and the self-reported impact of training on officers’ daily job activities. Based on the largely positive responses and comments from over 400 SROs, we provide recommendations for policy makers considering similar specialized training for SROs. 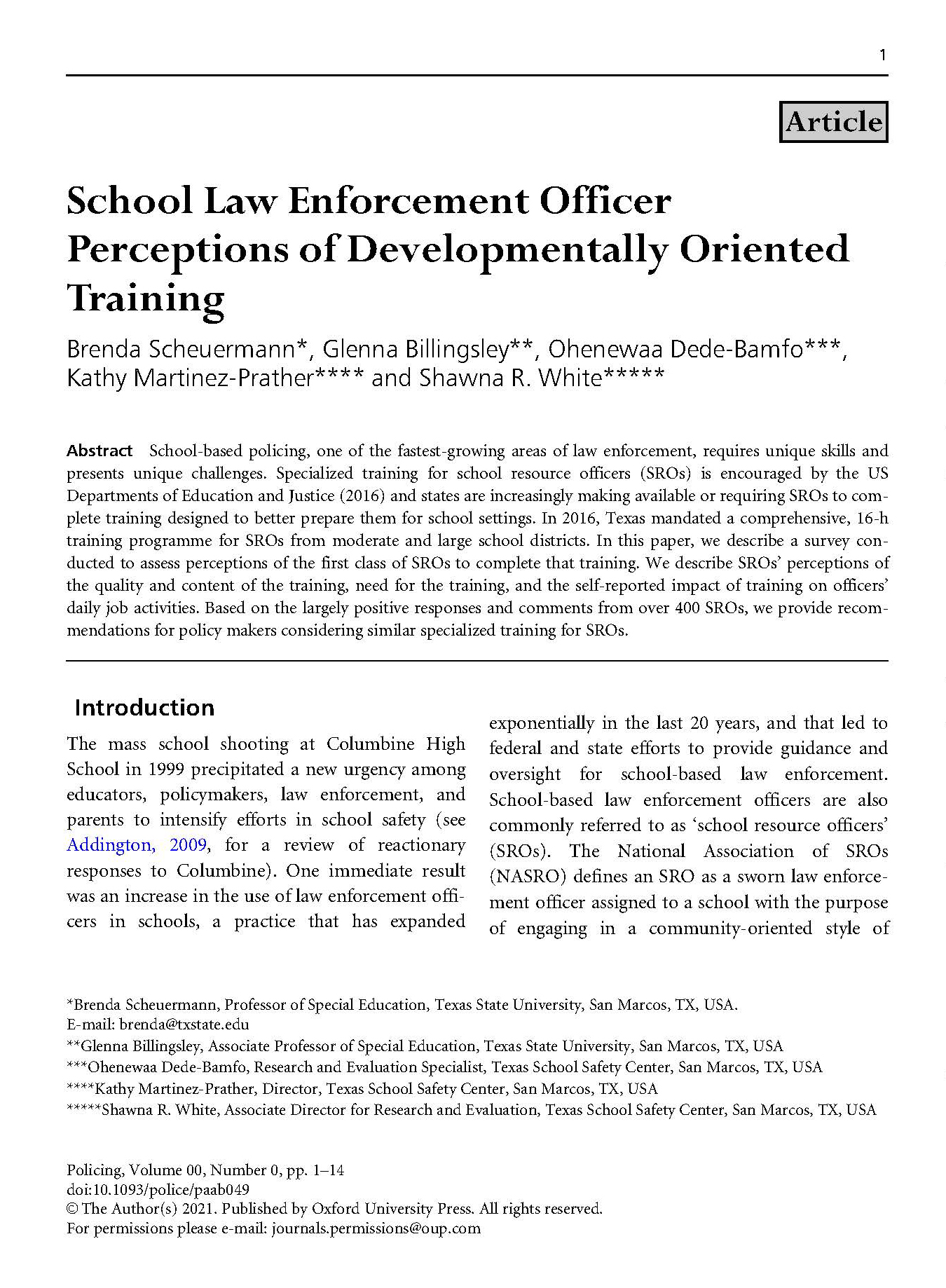 School–police partnerships that place police officers in K-12 schools are continually forging nationwide, despite a lack of empirical evidence of effectiveness. In response to this trend, we examined the current state of such partnerships, as well as school policing practices in general. We conducted focus groups with educators and school-based law enforcement officers (N = 43) across the state of Texas. Our results revealed five key areas of opportunity for improving collaboration: recognizing the desire for cross-training; knowing who has authority when; nurturing the ‘serve’ component of school policing; gaining community support; and the need for strategic documentation. The present study serves a larger purpose, which is to inform the development of a strategic framework to guide school policing programme implementation. All results indicate a need for and potential positive impact of such a framework to enhance school–police collaboration and thereby improve school policing outcomes. 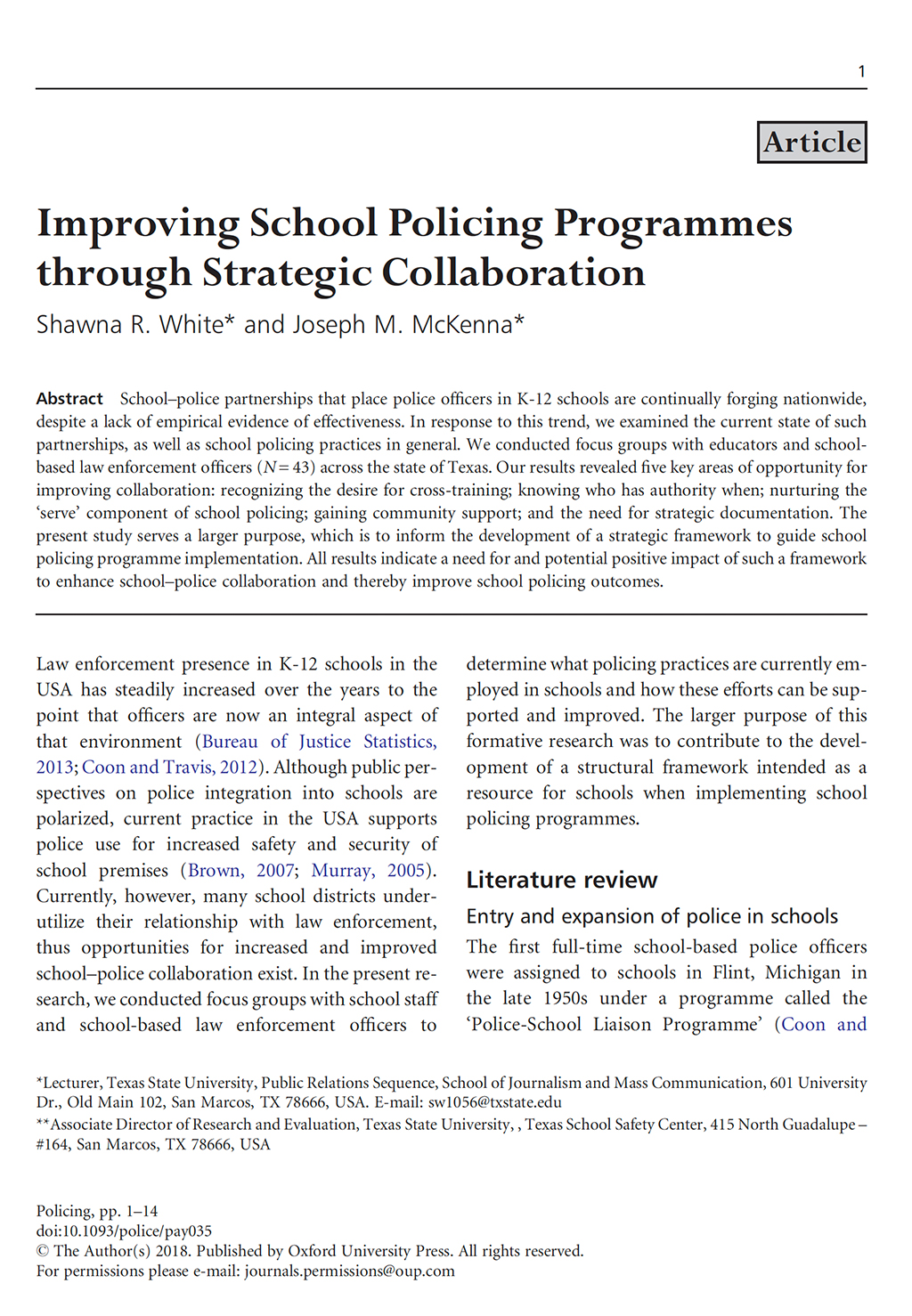 Examining the Use of Police in Schools: How Roles may Impact Responses to Student Misconduct

Prior research has suggested that the use of police in schools has resulted in negative outcomes for students; however, this line of research has failed to consider other factors that may influence an officer’s response outside of their mere presence. Over time, the roles and duties of police in a school setting have continued to expand as a result of social and political shifts in criminal justice and education policy. Paralleling this expansion has been the development of a more punitive school discipline environment where students are more likely to be suspended, expelled, a ticketed, and/or arrested. As these two separate bodies of research have been tangentially related, in this study, we use role theory as a guiding framework to connect these two bodies of research and examine how officers’ roles may influence their responses to student misconduct. Data was collected via an online survey distributed to a sample of commissioned law enforcement officers working in Texas schools. The survey included measures of officer roles as well as vignettes to assess how officers would respond to specific situations involving students. Results of this study suggest that an officer’s role may influence how they respond to student misconduct, and therefore, may be an important piece of information for both researchers and practitioners when looking to minimize the potential negative impacts of using police in schools. These findings related to officer roles are discussed in terms of both practice and future research, while considering the larger discipline environment of schools. 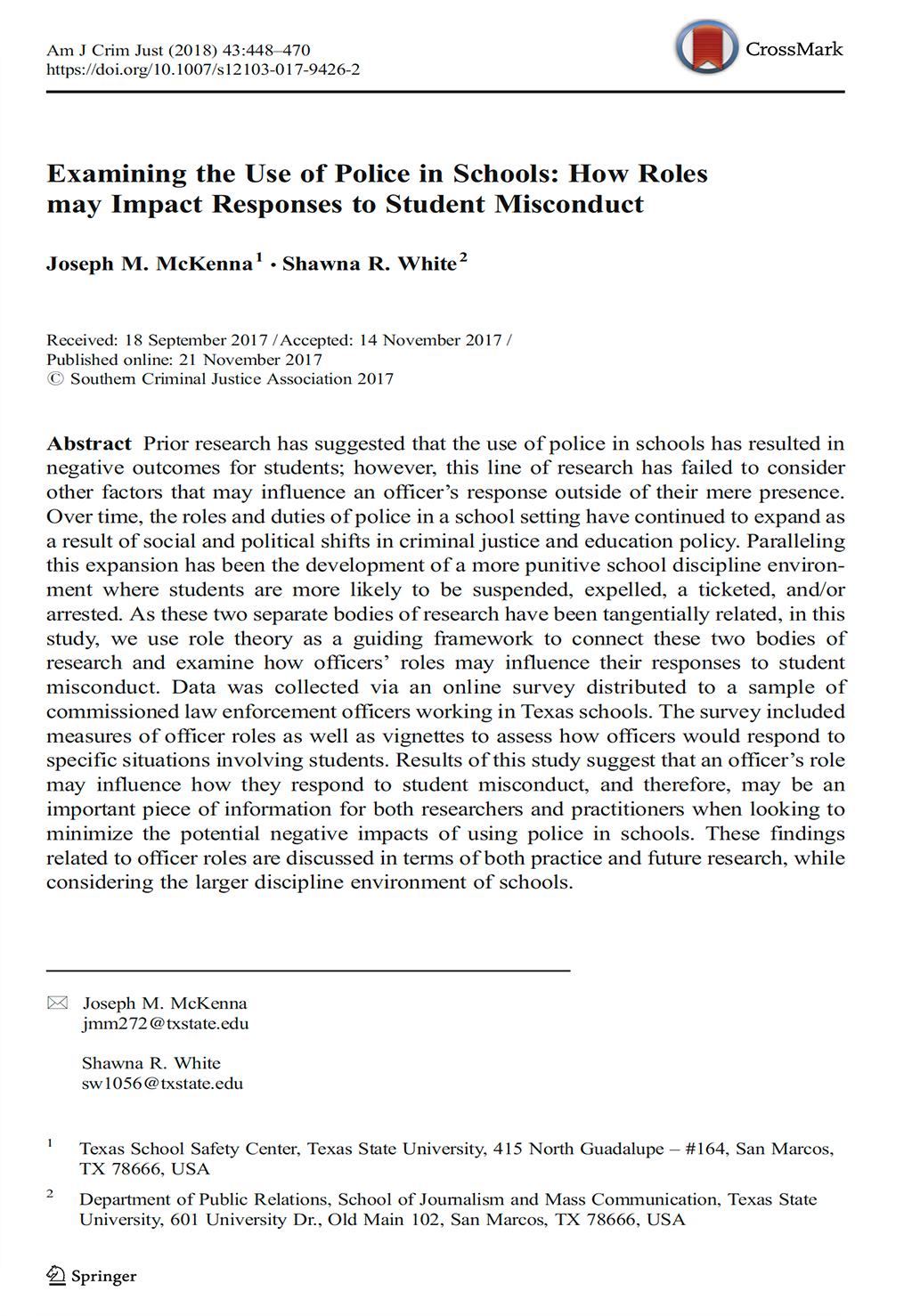 The prevalence of juvenile delinquency has the capacity to not only garner public attention but mobile resources in the war on crime. Driven in part by a perennial fear of youth, successive generations seem to “rediscover” the delinquency problem, redefine it at epidemic levels, and invest significant resources to fix the problem. The challenge, however, is that conclusions about the prevalence of delinquency is hampered by limitations in available data. This chapter will describe the primary ways of measuring juvenile delinquency and address their limitations. The chapter will address how society's emotional and political responses to juvenile delinquency present challenges when interpreting data sources both between communities and across time. Special emphasis is given to the contemporary problem of bullying, a dimension of juvenile delinquency, which has been recognized as a contemporary problem among young people. Policymakers are encouraged to consider a broad cross-section of crime measures when drawing conclusions about trends in delinquency, and also to recognize that changes in laws and how laws are enforced can impact data in important ways. 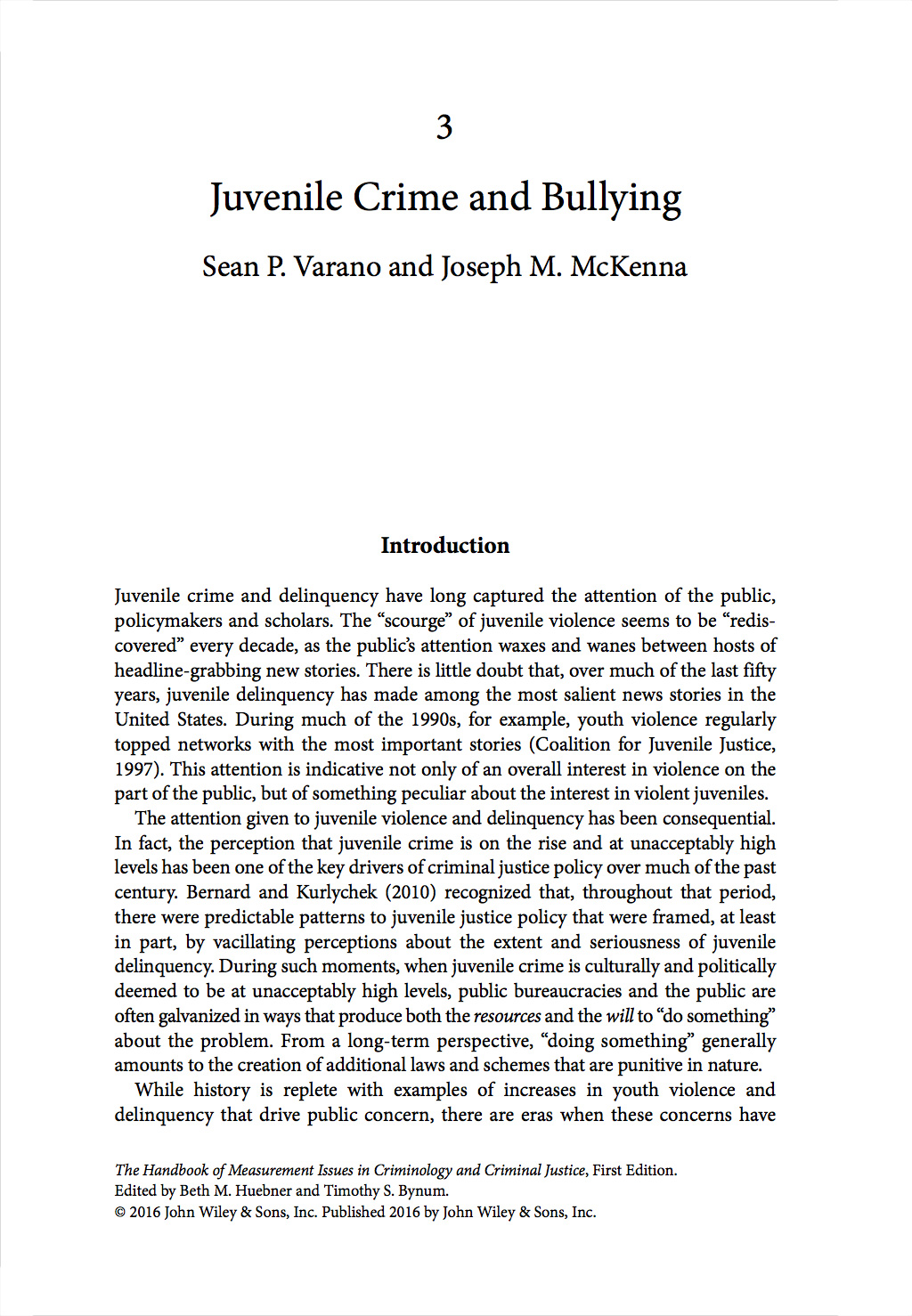 The presence of law enforcement officers in schools has generated an overwhelming amount of concern among educators, parents, researchers, and policy-makers. It is believed their mere presence in schools is associated with the school-to-prison pipeline (STPP), which suggests that the use of police criminalizes minor student behavior and pushes them into the juvenile and criminal justice systems. However, it remains unclear as to what impact law enforcement officers truly have on this phenomenon. The purpose of this study is to examine the impact of law enforcement officers on the STPP in relation to the roles they are assigned. We argue that an officer’s role impacts how they choose to respond to student misconduct, which ultimately could impact this pipeline. Interviews were conducted with school-based law enforcement officers in Texas and each was analyzed to identify common themes. The findings suggest a difference between the disciplinary actions officers perform compared to alternative disciplinary actions they believe would be more effective for handling different types of student infractions. The findings also suggest an association between the roles officers have and the types of disciplinary action they perform, which has direct implications for examining and addressing the STPP. Future research should focus on assessing a relationship between the types of training officers receive and the roles in which they are tasked. 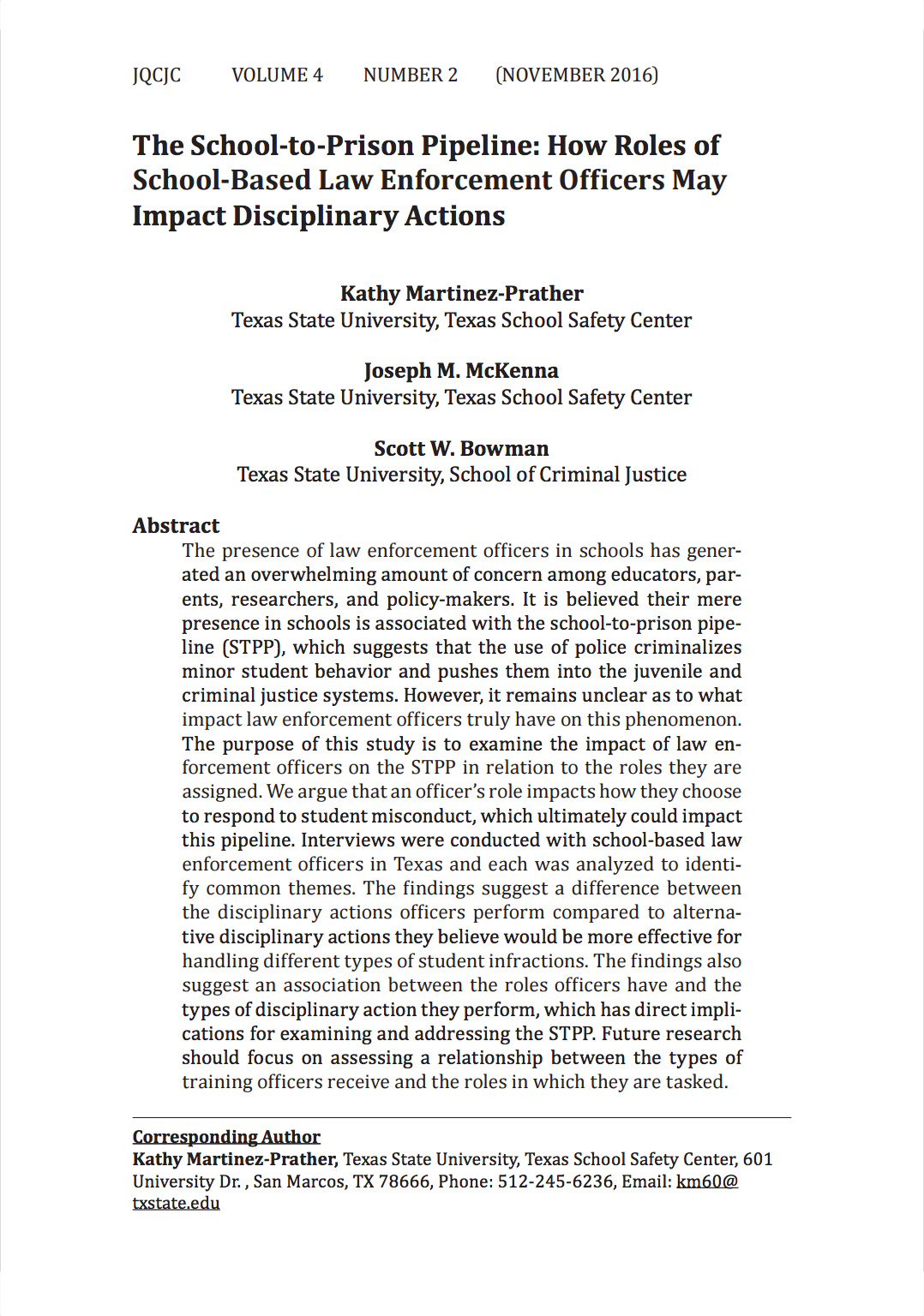 The Impact of Training on Discipline Outcomes in School-Based Policing

Purpose – The purpose of this paper is to examine the availability of training for police officers working in a school setting and to assess the relationship between training and the types of discipline school-based law enforcement (SBLE) officers most commonly administer to students. 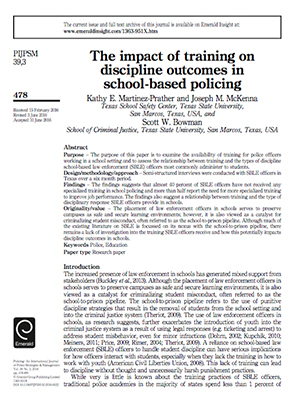 Design/methodology/approach – Semi-structured interviews were conducted with SBLE officers in Texas over a six-month period.

Originality/value – The placement of law enforcement officers in schools serves to preserve campuses as safe and secure learning environments; however, it is also viewed as a catalyst for criminalizing student misconduct, often referred to as the school-to-prison pipeline. Although much of the existing literature on SBLE is focused on its nexus with the school-to-prison pipeline, there remains a lack of investigation into the training SBLE officers receive and how this potentially impacts discipline outcomes in schools.

The Roles of School-Based Law Enforcement Officers and How Their Roles Are Established: A Qualitative Study

Recently, considerable attention has been directed to violence and misbehavior in U.S. schools. In turn, schools have looked for solutions to address such concerns, one of which is the use of law enforcement officers. The aim of this research is to explore how law enforcement officers define their actual roles, as well as their perceived roles in an educational setting. Also, this study examines the process for establishing these roles within the school environment. A total of 26 law enforcement officers were contacted by phone and participated in an in-depth interview. Each interview was transcribed into NVivo, and subsequently coded to identify general themes and common phrases. The findings suggest that officers working in the school environment are taking on many roles, some of which they do not consider appropriate. In addition, who establishes these roles varies considerably. The findings are discussed in terms of their deviation from prior literature as well as needed future research endeavors. 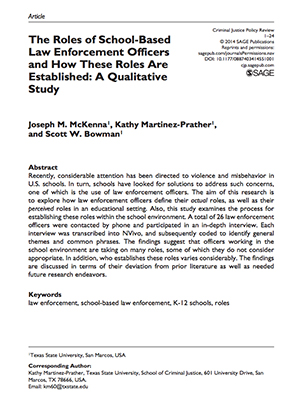 Law Enforcement in Schools: An Analysis of Ethical Issues 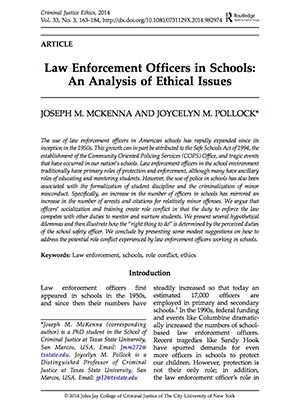 The use of law enforcement officers in American schools has rapidly expanded since its inception in the 1950s. This growth can in part be attributed to the Safe Schools Act of 1994, the establishment of the Community Oriented Policing Services (COPS) Office, and tragic events that have occurred in our nation's schools. Law enforcement officers in the school environment traditionally have primary roles of protection and enforcement, although many have ancillary roles of educating and mentoring students. However, the use of police in schools has also been associated with the formalization of student discipline and the criminalization of minor misconduct. Specifically, an increase in the number of officers in schools has mirrored an increase in the number of arrests and citations for relatively minor offenses. We argue that officers' socialization and training create role conflict in that the duty to enforce the law competes with other duties to mentor and nurture students. We present several hypothetical dilemmas and then illustrate how the "right thing to do" is determined by the perceived duties of the school safety officer. We conclude by presenting some modest suggestions on how to address the potential role conflict experienced by law enforcement officers working in schools.

Sexting Among Teenagers in the United States: A Retrospective Analysis of Identifying and Motivating Factors, Potential Targets, and the Role of a Capable Guardian.

Martinez-Prather, K., & Vandiver, D. M. (2014). Sexting among teenagers in the United States: A retrospective analysis of identifying and motivating factors, potential targets, and the role of a capable guardian. International Journal of Cyber Criminology, 8(1), 21-35.

Sexting is often broadly defined as the sending and/or receiving of sexually suggestive images or messages to peers through a cell phone (Mitchell et al., 2012). The use of broad definitions and sampling methods among prior sexting studies has produced variations in the research findings. The current study provides a retrospective examination of sexting among 378 teenagers sampled from university college freshmen at a midsize southern university in the United States regarding sexting attitudes and behaviors during high school. Approximately one-third of the participants reported sending a sexting image of himself or herself in high school to someone else using a cell phone. Those who reported more texting use, in general and those who spent more time with friends in an unsupervised setting were significantly more likely to report sexting. Parental monitoring, however, was not significantly related to sexting. The implications of these findings are discussed.