Findings on Safety and Security in Texas School Districts 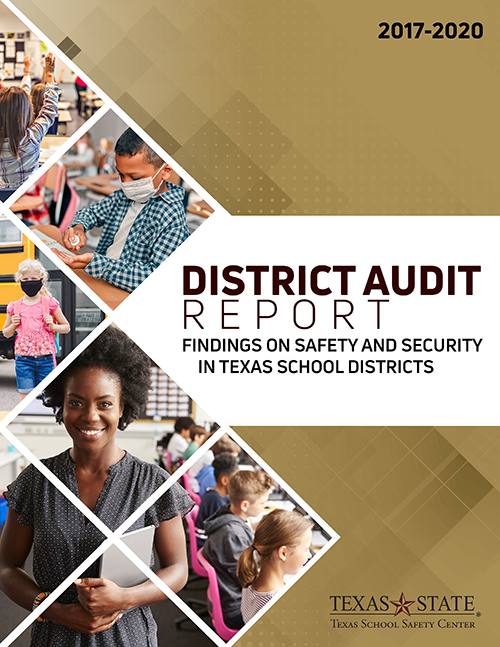 The purpose of the District Audit Report (DAR) is to provide key results of the safety and security audits completed by Texas public school districts. The Texas Education Code (TEC) requires districts to complete safety and security audits of their facilities once every three years (§37.108(4)(b)), in accordance with procedures developed by the Texas School Safety Center (TxSSC) or a person included in the registry established by the TxSSC (§37.108(b)). Districts then submit a summary of the findings to the TxSSC (§37.207(b)), where reviewers aggregate data into a statewide report for the public (§37.207(a)(3)).

The TxSSC provides guidance for districts to develop safety and security audit procedures as well as tools to assist in the assessments (§37.207(1)). The TxSSC School Safety and Security Audit Toolkit includes step-by-step guidance and job aids for conducting audits, as well as comprehensive district facility audit checklists. The toolkit contains a series of spreadsheets with specific evaluation statements for a variety of facilities and functions. These statements are a combination of best practices, promising practices, and/or requirements appropriate for certain types of facilities. Model safety and security audit procedures developed by the TxSSC are available for use by districts or contractors to conduct safety and security audits. Neither the TEC nor administrative rules require that school district personnel conducting the audit hold a specific certification. Whether districts decide to conduct their own audit or hire someone from the Texas School Safety and Security Registry, it is a best practice to ensure the audit is reviewed from various disciplines or perspectives and include a cross-functional group of school personnel and collaborative community partners (e.g., local first responders).

While the term "audit" is included in TEC §37.108 and used throughout this report for consistency, the process was developed as an ongoing self-assessment of a district’s safety and security. Audits should be an ongoing process of identifying specific district, campus, or facility hazards, threats, and vulnerabilities and making improvements in safety and security plans and processes.

The DAR provides a summary of safety and security information, which is an aggregate of self-reported data submitted by Texas public school districts, for the reporting cycle of September 1, 2017 through October 31, 2020 (deadline extended due to COVID-19). The Texas Legislature authorizes the TxSSC to determine the method used to collect audit results. Data were collected via the DARtool, an online reporting mechanism developed by the TxSSC and deployed using Qualtrics (an online survey programming software). The DARtool allowed district superintendents or their designees to report specific audit information electronically. Data from the DARtool were analyzed and reported at an aggregate level.

The TxSSC did not substantiate the totality of the data reported by districts and the accuracy of responses received from each district was presumed. The TxSSC does verify some aspects of the reported data to assess district safety and security in relation to legislative mandates. The TxSSC took measures to safeguard the confidentiality of each reporting district by structuring the questionnaire to protect against identification. According to TEC §37.108(c-1), safety and security audit information is not subject to disclosure. However, certain exceptions regarding disclosure are permitted under TEC §37.108(c-2).

A total of 1,022 (100.0%) districts reported audit results via the DARtool for this cycle (2017-2020). The following section provides key findings and recommendations from the safety and security audits of school districts in Texas.

As evidenced by the 2017-2020 District Audit Report, Texas school districts continue to work persistently toward creating safe and supportive school environments. The data collected during this reporting period suggest most Texas public school districts are implementing safety and security measures required under Chapter 37 of the Texas Education Code, as well as guidance and best practices.

Since 2005, the Texas Education Code has required every school district to adopt and implement a multi-hazard emergency operations plan (EOP). Beginning in 2020, the TxSSC conducted a cursory overview of the statewide status of all 1,022 K-12 public school EOPs. The review criteria included evaluating whether each district had an EOP, and furthermore, whether the EOP was sufficient.

The following recommendations, which are based on a cross-comparison between findings from the district audit report and the EOP reviews, are proposed to further assist schools in their pursuit of safe and secure learning environments.